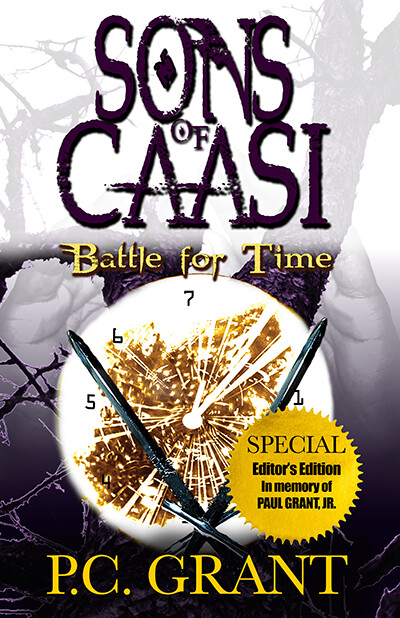 The twin brother of the prophesied Time Ruler is desperate to escape his brother's shadow and the tragedy his birth portends. Plunged into a storm of deception, he seeks answers in an ancient prophetic book and sets off a chain of events that sends his life spiraling out of control. After a shocking murder, and with his best friend's life hanging in the balance, he must face the enemy he fears most. Will he be saved by a love stronger than death, or does being the second-born of twins foreshadow his inevitable doom?

I've changed my author pen from C. Grant to P.C. Grant to honor my brother and the fictional stories we created. He was the inspiration behind the upcoming Sons of Caasi stories and co-creator of many of the characters. After his sudden and tragic passing, The publishing company has agreed to release an editors special edition HC of the book in his honor.

My brother was a pillar of hope and inspiration for his nieces, nephews, me, and everyone who was blessed to know him.

He never married or had any children of his own, but he invested his life in every young person he knew. He was devoted to his nieces and nephews and children of countless friends for whom he was a beloved uncle.

Though my brother, Paul Grant, Jr. will not see the final publication of Sons of Caasi, your purchase will help support the launch of a philanthropic foundation in his name. A non-profit organization, the foundation will support selfless individuals like him, who are willing to fill the void for fatherless, abandoned, and at-risk children, a cause that was dear to his heart.

Thank you for your support,

Save this product for later
Display prices in: USD